Sustainable development
that embraces the economic, social
and environmental
ecosystem

It is an undelayable task for every type of economic organization the necessity to undertake a responsible behavior to not compromise anymore the equilibrium of an economic, environmental, or social system.

As a Cooperative venture deeply rooted in the territory and profoundly convinced of the goodness of the territorial heritage, the Trevalli Cooperlat approach is most closely related to the concept of Common Added Value. According to Trevalli Cooperlat, the term common added-value includes, rather than just attention to a good cooperation, thus care for the support of the work and the revenues of the conferrer associates and, more in general, of the whole zootechnical-agricultural industry, also the larger extent of the creation of fruitful collaborations with entities well accredited on the territory, from which a good synergy could spring, as well as long-term projects, both useful to the improvement of people’s quality of life.

All this results in operative choices which contribute to safeguarding the zootechnical-agricultural sector and the small and medium-sized local producers, thus, determining the so-called positive externalities, which can be summed up in impacts on:

Summing up, always keeping in mind the mutuality- one of the founding principles of the cooperation - Trevalli Cooperlat wants to implement a sound and good management activity, without neglecting the promotion of a culture able to reinforce the bond with the territory and its products, the care for a more sustainable development and for more socially responsible actions.

Generally, the cooperative ventures have to face hard and controversial situations. In fact, it is hard to find a perfect combination between short-term necessities- to maximize the profits of conferring producers- and long-term necessities- for the achievement of long-lasting competitive advantages over the competitors in a market more and more characterized by the concentration of supply and the reduction of the product lifecycle.

Trevalli Cooperlat, standing out from the stage of the Italian agri-food cooperation, chose to abandon the niche strategies, which have been a distinctive point in its early years of activity, to undertake the path of the dimensional development. This, in time, permitted to leverage on the cash-flow obtained from the current management and to avoid resorting to the financial market. This major ability of self-financing allowed to support long-term technical-productive investment programs, the acquisition, the reorganization and the rebalancing of other dairy companies and, contextually, allowed to increase our own resources and to minimize the financial risk.

Trevalli Cooperlat has a well-defined policy for both Quality and Environment. The ambitious objective of industrial rationalization and of excellence, as well as all the production processes- from the supply phase to the packing of finished products - are performed with full respect for the surrounding environment.

For this reason, from 2012, Trevalli Cooperlat operates by means of its own Environmental Management System (EMS), certified UNI EN ISO I4001.

The system has been implemented as to guarantee the achievement of the objectives and principles established by the environmental policy while executing/implementing/developing its own operations/activities and controlling the entire channeling system. Listed below the objectives of the Environmental Policy:

The EMS model, an organizational system, which constantly need to be surveyed and periodically revised, follows the process of the PDCA (Planning, Development, Control, Action), a cyclic dynamic which retains inside the principle of the “never-ending development” and which allows to answer to the variable conditions of internal and external factors.

The current challenges in the field of Environmental Policy:

Click on the following image to consult the monitoring system of emissions in the atmosphere. 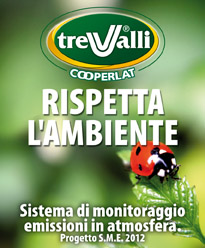 The dedication of Trevalli Cooperlat in the field of the environmental sustainability is recognizable also in its emblematic product, the milk. In fact, the milk has been certified with the quality brand of the Marche region, QM. The QM quality brand is a eulogy to the agri-food productions of our territory, it guarantees the origin, the quality and the traceability of our products and ensures major clarity for the consumer.

The Solidarity has a lot of worth for Trevalli . The cooperative venture for some years now has been participating to several initiatives in favor of the most disadvantaged categories and has been promoting projects concerning social responsibility and solidarity, involving also its own consumers.

The project “Alimentiamo la vita”, in collaboration with “La Lega del Filo d’Oro”, the project “Abbraccia Mamma”, realized to support the “Gruppo Abele” and the initiative “Scuola di Latte”, which has been promoted in Marche and Abruzzo regions. Multi-year projects of social solidarity, to witness the long-term strategic effort of the Trevalli Cooperlat. 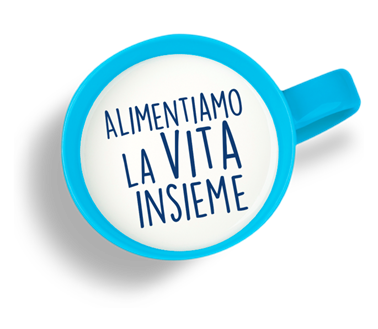